Hello, everyone! I’m here as Ofelia today, and it’s release day! The Drunken Dog is a short story I wrote for JMS Books’ Sugar or Spice call. It’s a call for short stories where the story should have something to do either with sugar or with spice. I went with spice.

It seemed like an easy way out LOL. I made it paranormal, so scents play a bigger role than they would in a contemporary story, and I made Zev Nightfall my main character.

If you’ve read Cup o’ Sugar, he’s mentioned in it, but you don’t have to have read it to read this. They’re only loosely linked.

In Cup o’ Sugar, I introduced The Halfhide Pack which is a small pack of werewolves. They are trying to make room for themselves in the middle of a city, and Zev is the pack beta.

I like writing paranormal, and I love monsters, both those who are true monsters and the more common werewolves and vampires kinds of creatures. In a weak moment, I turned Zev into part fae, and if there is one kind of monster I’m not comfortable with it’s the fae.

It’s the lack of knowledge.

I’ve read a few hundred vampire books, probably more werewolf/shifter books, but I haven’t read all that many fae books. I don’t dislike them; I just feel there are rules I don’t know. So I made myself really nervous by suddenly deciding I needed a little fae in my life.

Zev is a crossbreed, so he’s not pure fae, but he turns into a huge moss-green wolf with razor-sharp teeth. According to the Irish myth of the cú sídhe, it’ll bark three times. By the time of the third bark, you have to have found a safe place to hide or there will be terror and death. 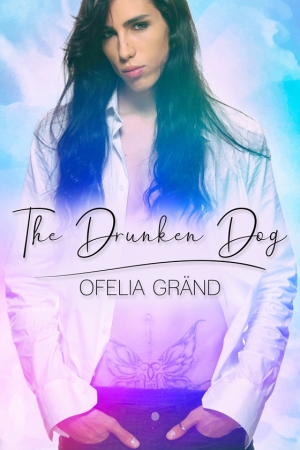 Zev Nightfall has a secret. For two years, he’s been the beta in a loosely knitted werewolf pack, but he’s not a werewolf. He’s a crossbreed, part wolf, part fae, which is a death sentence in most packs. That’s not his only problem. One night he meets Otis, a vampire. Shifters and vampires aren’t friends, yet fighting is the last thing on Zev’s mind.

Otis Miller is in the middle of rebuilding his rockstar persona. Again. A hundred years ago, all he had to do was to move when people started noticing him not ageing. With cameras and social media, it doesn’t work anymore, and he isn’t sure he has the energy to start over. Then there is the shifter coming to the bar where he’s singing. He makes Otis want to jump off the stage and never look back.

Zev knows he shouldn’t get involved with a vampire; he has enough problems as it is. But Otis is alone and vulnerable, and it tugs at Zev’s heartstrings. Normally, Otis stays away from other supernatural beings, but something about Zev makes him want to curl up on his lap and forget about the world around them. But how would two people from enemy species make things work, and will Zev’s pack ever accept not only a crossbreed but a vampire as well?

Otis grimaced. It was way too early to dump his shit on Zev. They’d talked twice, and here Otis was, pouring his heart out.

“We don’t change either. We mature till we look about forty, but we live for five-six-seven hundred years. Unless someone kills us.”

Otis looked at him. He’d believed wolves aged as humans did, but he should have known. Thinking back, there had been wolves in this city far older than they looked. He had never wanted to know about other supernatural beings, had always done his best to avoid them, but maybe it had been a mistake. Ignorance might be a bliss, but he didn’t like looking stupid in front of Zev.

Zev didn’t look forty, or maybe he did. Otis would forever look twenty-two, though twenty-two back then wasn’t like twenty-two now. “How old are you?”

“Oh… so you have many years left to live.” An ache spread in Otis’s chest. He could have several hundred years with Zev. He glanced at Gerald—his time was running out, and when Gerald was gone, he’d have no one.

“You never know. Maybe the Bloodclaws will attack me when I leave here.” He grinned but his words had ice filling Otis’s gut.

“I’ll walk you home.” He got to his feet, needing to move. A burning rage coursed his veins as he pictured someone attacking Zev.

“I’m capable of looking after myself.” Zev emptied his glass.

“Honey, you might not know this, but I care about you.”

Zev chuckled and shook his head. “You don’t know me.”

“The spicy scent. I’ve never smelled anything like it, and I want to bathe in it.”

“No, I know you don’t feel the same way. I can’t glamour you into thinking I’m charming.”

The way Zev stared at him made him try to glamour him again only to delete the last few seconds of their conversation from his memory.

“Why doesn’t it work?” Otis threw his hands in the air. “It works on wolves. I’ve done it on wolves before.”

In a heartbeat, Zev raised his lip and revealed a double row of razor-sharp teeth. Otis backed a step, then stilled. What the fuck? “You’re not a wolf.”

What could he be? A monkfish? Though he doubted there were monkfish shifters. And would he be able to sit in a bar if he was?

“Your teeth are not wolf teeth.”

Zev studied him for several seconds, and since Otis’s legs were a little shaky, he slid down on the couch again. “You’re fae. Fae wolf?” What were they called? Cú sídhe? He wasn’t sure he believed in them.

“Nah. I’m a crossbreed. My mom was a wolf shifter, my father was fae.”

“So, you don’t turn into a green wolf the size of a cow who barks three times before slaughtering everyone in the vicinity? No, of course not.” Otis waved a hand. Fairy tales. He hadn’t heard anyone speak of cú sídhe in hundreds of years.

Zev sighed and rested his head in his hands. Quicker than any human could move, Otis got up from his seat and slipped in next to Zev. “No wonder I want to eat you.” He put a hand on his shoulder, unsure if his touch would be welcome.

“You do? I thought you wanted to fuck me.”

“Oh, no. I want you to fuck me while I drink your blood. And trust me, the wanting someone to fuck me part doesn’t happen often.” Otis winced. He shouldn’t have said that. Zev hadn’t done anything to indicate he was interested in Otis, and he didn’t smell of arousal.

Otis frowned. “What was dramatic about it?”

“I’m not so easily shocked, you know.”

“You think I tried to shock you?” He slowly reached for Zev’s hand, and when he allowed it, Otis guided it to his lap. He was so hard he feared he’d burst, had been since he picked up Zev’s scent outside the door to the bar.

Zev didn’t yank away, but he shook his head and gave Otis an amused look. Amused wasn’t what he’d been hoping for.

“You don’t like me.” Humiliation followed his words. God, he was making a fool of himself. He was so used to falling back on his ability to glamour people. If they weren’t interested, he simply deleted their memory of him. He couldn’t with Zev.

Had he had any blood to spare, he’d blush. He pushed at Zev’s arm, wanting to run away.

“Hey.” Zev took his hand and stood with him. “What happened to walking me home?”

Otis looked away. He hadn’t been this mortified since he was a human forced to work in the brothels. He’d been young and starving when the madam had tricked him into a contract. His looks had made him a much sought-after whore, and when he’d grown older, the madam had turned him against his will. Not she personally. In exchange for blood and satisfaction, a vampire she knew turned the working boys and girls she wanted to… preserve.

Otis shuddered. He hated vampires, and being one hadn’t changed his opinion.

It had taken years, but he’d managed to escape. Since then, he’d been surrounding himself with humans. Humans he could control and who couldn’t force him to do anything. It was safe or as safe as life as a vampire could be.

Otis jumped, the nightmarish memories dissolving, and he was back in the bar he’d made his—not home, he didn’t have a home, but a place of recovery. He came here when he had no other place to go.

“Are you okay?” Zev tugged at his hand. When Otis didn’t move, Zev stepped closer. Slowly, he wrapped an arm around his waist and pulled him in for a hug.

Zev’s chuckle was low, and it sent a shiver through him.

“You don’t want to hold me, and you’re causing a scene. People are watching.”

Zev’s hold on him tightened, and he wanted nothing more than to melt into the embrace. When had someone last held him?

“You can make them forget.” Zev’s other arm came around him as well, fingers finding their way in under his hair and up to his neck. Otis shivered.